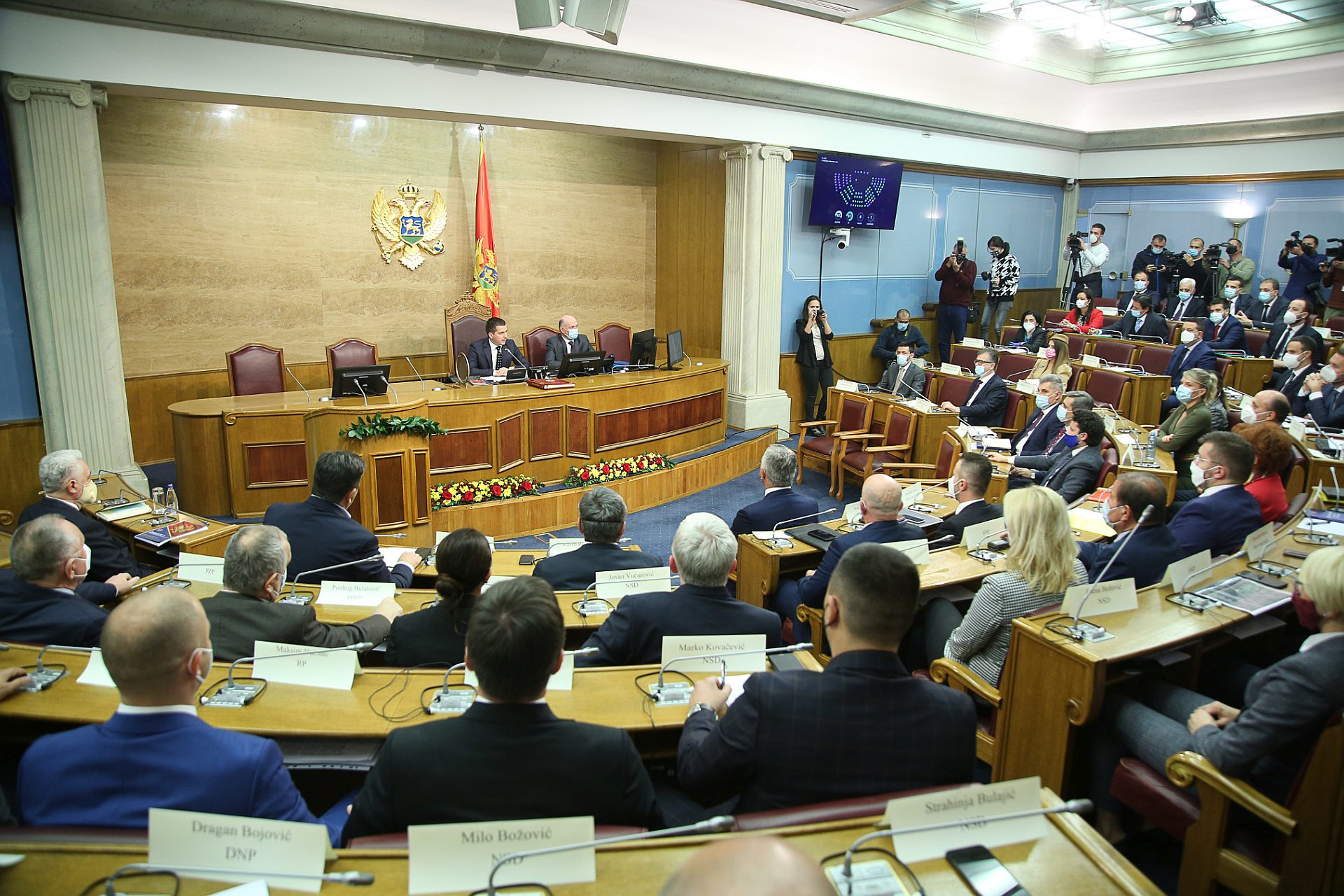 The Serbian media interpretations of the new government constitution in Montenegro

The session of the Parliament of Montenegro on the appointment of the new Prime Minister and members of the 42nd Parliament started yesterday, on December 2, and the discussion was tainted by criticism mainly of both the government and the opposition.

Typical of the Serbian media reporting is their focusing on the presence of Montenegrin President Milo Djukanovic at the session, which was covered by sensationalist headlines: SHOCK IN PODGORICA Krivokapic reads the exposition, Milo is gaping in the first row!; DISPUTES WITH MILO’S PEOPLE: Here’s what the DPS supporters jeered at Krivokapic; „NOT OUR GOVERNMENT“ Chaos in Podgorica, Milo brought women outside Zdravko’s window, they are bawling out! (VIDEO). Besides, the news portal Pravda states that everything is in complete disarray because Montenegro does not still have a Government.

By the way, the session was previously scheduled for November 24, but because of the suspicions that the new ruling majority intended to appoint the new Government on the anniversary of the abolition of Montenegro’s independence in 1918 – it was postponed. The Serbian news portals presented the reason for the postponement with sensationalist headlines: MILO FOUND A LOOPHOLE IN THE CALENDAR, the DPS has a way to stay in power (Alo), KOMITAS AND MILO SET THE DATE: Due to the pressure of the Montenegrin nationalists the appointment of the new Government postponed for December 2 (Novosti).

Even the decision of the Ministry of Foreign Affairs to declare the Ambassador of Serbia to Montenegro Vladimir Bozovic persona non grata gave rise to a new narrative. The news portal Nacionalist published a statement of Vladislav Jovanovic, a former Minister of Foreign Affairs of the Federal Republic of Yugoslavia, in which he claimed that the expulsion of Ambassador Bozovic was a tendency of the outgoing regime to complicate the situation to the new Government in order to have ground for their possible come back in future.

Contrary to the election reporting that praised the holder of the list For the Future of Montenegro Zdravko Krivokapic, the Serbian media rhetoric has changed after the elections with him targeted by many news portals. Therefore, the Informer tabloid writes that the technocratic government of Milo Djukanovic continues to apprehend priests of the Serbian Orthodox Church (SPC) in Montenegro, emphasizing that Prime Minister-designate Zdravko Krivokapic approved the apprehensions at first, while the leader of the It’s in Black and White coalition Dritan Abazovic did not comment on that. Informer presented the event as an ongoing tremendous pressure on Serbs and the persecution of the SPC. Even the news portal Srbija danas criticized Krivokapic and stated that the Prime Minister-designate had double standards because he condemned the threat to Abazovic, but did not react when the assassination of one of the DF leaders Milan Knezevic was planned.

The news portal Republika spread the narrative that businessman Miodrag Daka Davidovic decided to found a new political party in order to provide Prime Minister-designate Zdravko Krivokapic with political support and infrastructure for challenges of the future elections. The move was understood as underhand dealings of the next Prime Minister and the businessman in Montenegro. They added that, according to the findings of Srpski telegraf, the goal was to marginalize the Democratic Front, which is the greatest impetus of the fight against Milo Djukanovic’s regime.

The Prime Minister-designate was targeted by Serbian media even because of the issue of revoking Kosovo’s independence recognition. The news portals Novosti and Pravda wrote that the messages sent during Metropolitan Amfilohije’s funeral were a clear indicator of the general attitude of the believers regarding the Kosovo issue, but also the differences in attitudes regarding the same issue of the new ruling majority headed by Prime Minister-designate Krivokapic. The headlines of both texts stated that the Kosovo issue is Amfilohije’s test for Krivokapic and that it opened the question of revoking the recognition of that fake state.

Similar messages were sent by the member of the main board of the Serbian Progressive Party (SNS) Vladimir Djukanovic. He appealed that all of those who were shouting We don’t give you Kosovo (MNE: Ne damo Kosovo) during Metropolitan Amfilohije’s funeral should make straight away the next Prime Minister Zdravko Krivokapic revoke the recognition of the independence of that state. Djukanovic also criticized the initial candidates of the Prime Minister-designate Zdravko Krivokapic for the new Government. Via his Twitter account, he questioned the expertise of Dritan Abazovic, as well as the Montenegrin language that Nikola Terzic, the initial candidate for the Minister of Interior, is speaking.

Krivokapic was criticized for his alleged anti-Serbian politics. The news portal Objektiv writes that he stabbed Serbs in their backs, the Serbs who helped him win the elections and which he expelled from the Cabinet. The texts highlight that Krivokapic has been portrayed several times as Milo Djukanovic’s man, and that the question raises whether he was Djukanovic’s Trojan horse.

Whom will Krivokapic and Abazovic kowtow first?

The Serbian media were highly interested in the positioning of the leader of the Civic Movement URA Dritan Abazobvic in the new Government. The news portal Novosti claimed that Dritan will be given a position and that his seat is being secured. After the lawyer Nikola Terzic had withdrawn his candidacy for the Minister of Interior, Novosti wondered whether Abazovic would get it.

The information that the first official visit of the next Prime Minister and the Deputy Prime Minister would be to Brussels – that the leader of URA stated after the working breakfast with the Head of the EU Delegation to Montenegro Oana Cristina Popa, the Alo news portal published with the sensationalist headline: IT IS KNOWN WHOM TO KOWTOW Here’s what Krivokapic and Abazovic will firstly visit.

What is the outgoing government cooking up?

Besides Prime Minister-designate Krivokapic, the Serbian media targeted the outgoing government too, notably the President of Montenegro Milo Djukanovic and his Democratic Party of Socialists (DPS). The narrative on divisions in Djukanovic’s DPS and the dissolution of the party have been relaunched with sensationalist headlines: Milo’s on the hook, the DPS on the verge of collapse (Alo), THE DPS ON THE VERGE OF COLLAPSE: Tremendous turmoil and divisions in the former strongest political party in Montenegro (Srbija danas).

The narrative that the regime will not hand over the power peacefully and that it will do everything to prevent that has also been accentuated. The news portals Informer and Srbija danas published statements of analyst Bosko Vukicevic that the outgoing government was trying to thwart the constitution of the new Government by approving official projects that involve businessmen close to them. Vukicevic’s view on the situation was presented in headlines such as MILO’S REGIME HIT THE GROUND! The analyst revealed the last devious plan of the OUTGOING GOVERNMENT (Srbija danas), MILO SHARES PEOPLE’S MONEY WITH HIS BUSINESSMEN, THE LAST DEVIOUS PLAN OF THE OUTGOING GOVERNMENT! Krivokapic and his team must react swiftly, every hour is important! (Informer).

By analyzing the Serbian media content about events in Montenegro in the post-election period, the DFC has discovered that they were mainly publishing official statements of the politicians or institutions while wrapping them up in tendentious headlines in order to spread particular narratives.