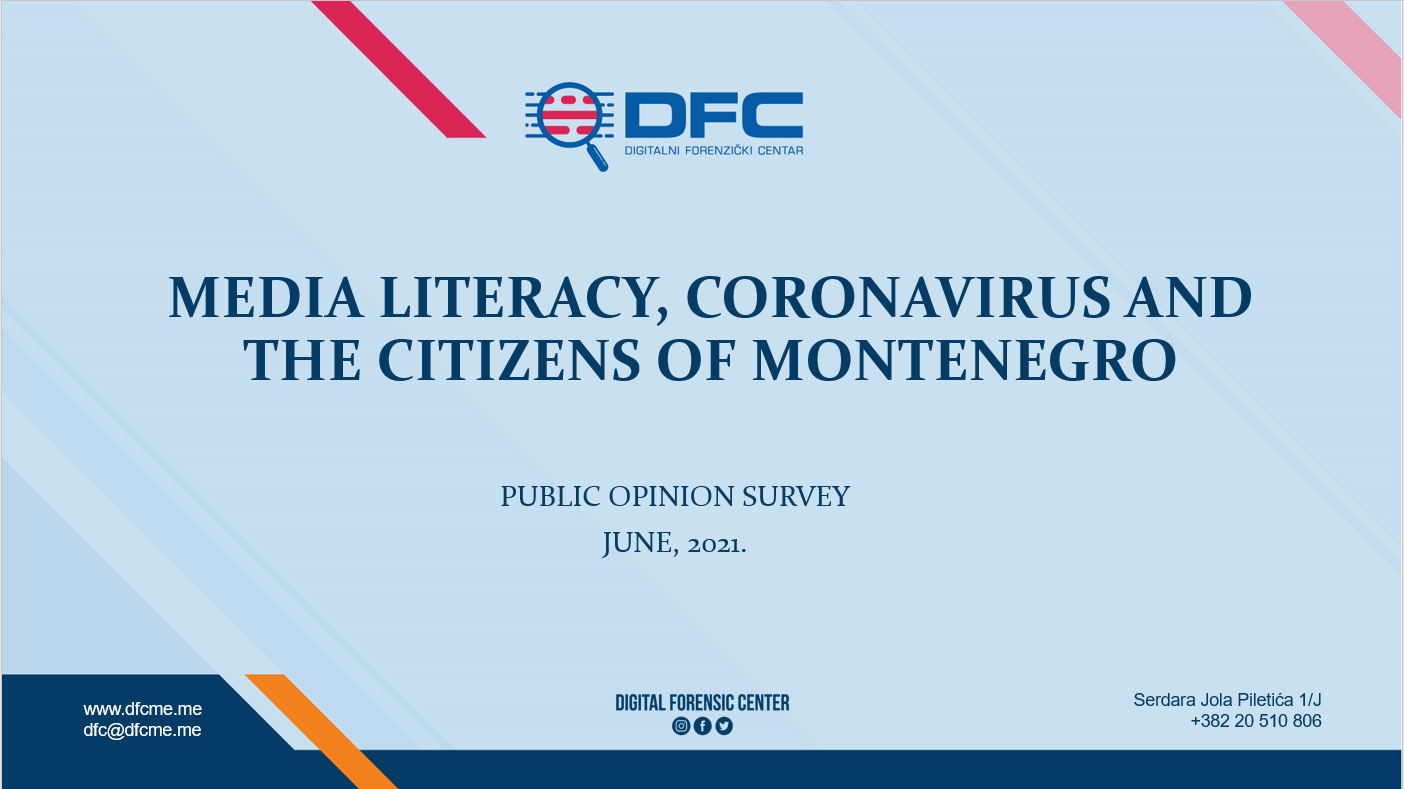 Public opinion survey – Media literacy and the citizens of Montenegro

The public opinion survey on media usage and media literacy represents a repeated quantitative survey, with the aim of annually following the tendencies and changes in attitudes and opinions of the citizens of Montenegro when it comes to the critical perception of the media content and media usage.

The survey was conducted on a representative sample, defined as a random three-stage stratified sampling. The sampling evaluation is based on the available data from the 2011 census and evaluations on the population demographic characteristics from 2020. The sample is representative according to socio-demographic criteria – region, settlement type, sex, and age.

Television is the most used media, and 87.8% of the respondents say that they watch television several times a week or every day.

The second most used media is the Internet, with approximately 65% of the respondents who use online media such as news portals, YouTube, social media, or other types of media available online every day or several times a week

While estimating the level of trust in media where 1 is Don’t trust at all and 5 is Completely trust, most of the respondents stated that they partially trust media. 30.8% of the respondents trust television, with an average grade of 3.02. Compared to the last year’s data, the average grade for trust in television broadcasters is slightly decreasing.

Among the respondents between 18 and 24 years old, one in five citizens (23.6%) say that they trust social media, while that percentage varies between 3.9% and 12.3% among other age categories.

Of the total sample, 21% of the respondents estimate that the Montenegrin media report objectively and professionally while following the code of ethics. As few as 2.8% of the respondents estimate that media stick to the code completely, while 25.5% think that Montenegrin media follow the code partially. Almost one in four citizens (24.2%) negatively estimates the media reporting regarding professionalism, ethics, and objectivity.

Most of the respondents (81.9%) state that they are familiar with the notion of fake news.

As many as 73.2% of respondents estimate that they have noticed fake news in the Montenegrin media at least once. One-third (or 34% of the respondents) say that they notice fake news often or on a daily basis.

One in 4 respondents (or 24.9%) estimates that it is difficult to assess whether the information found in the media is true or false.

If they notice fake news on social media, more than a third of the respondents (36.6%) estimate that they would probably do nothing about it and ignore such a piece of information.

The respondents mostly say that they would react to the notice of fake news by discussing it with their friends and colleagues (32.4%) and family members (26.8%).

Fake news and reporting on coronavirus

66% of the respondents said that they get informed about the coronavirus pandemic in Montenegro on television, while 50% of them does that via news portals. One in five respondents (22.6%) say that they seek information on the official websites of the relevant institutions (Institute for Public Health, Ministry of Health, World Health Organization, and alike).

When it comes to the trust in particular Montenegrin televisions in the context of reporting on the coronavirus epidemic, the respondents say that they mostly trust TV Vijesti (50.9%) and RTCG (48.8%).

More than one-third of respondents (36.9%) are not aware of the existence of regulatory bodies.

As much as 88.1% state that they have never filed a complaint regarding certain media content. 18.9% of them state that they did not do that because they think it would not be effective, while 19.9% say that they do not know how and to whom they can file it.

Half of the respondents (54.7%) believe that it is necessary that a state always monitors and controls media content online in order to stop disinformation and fake news.