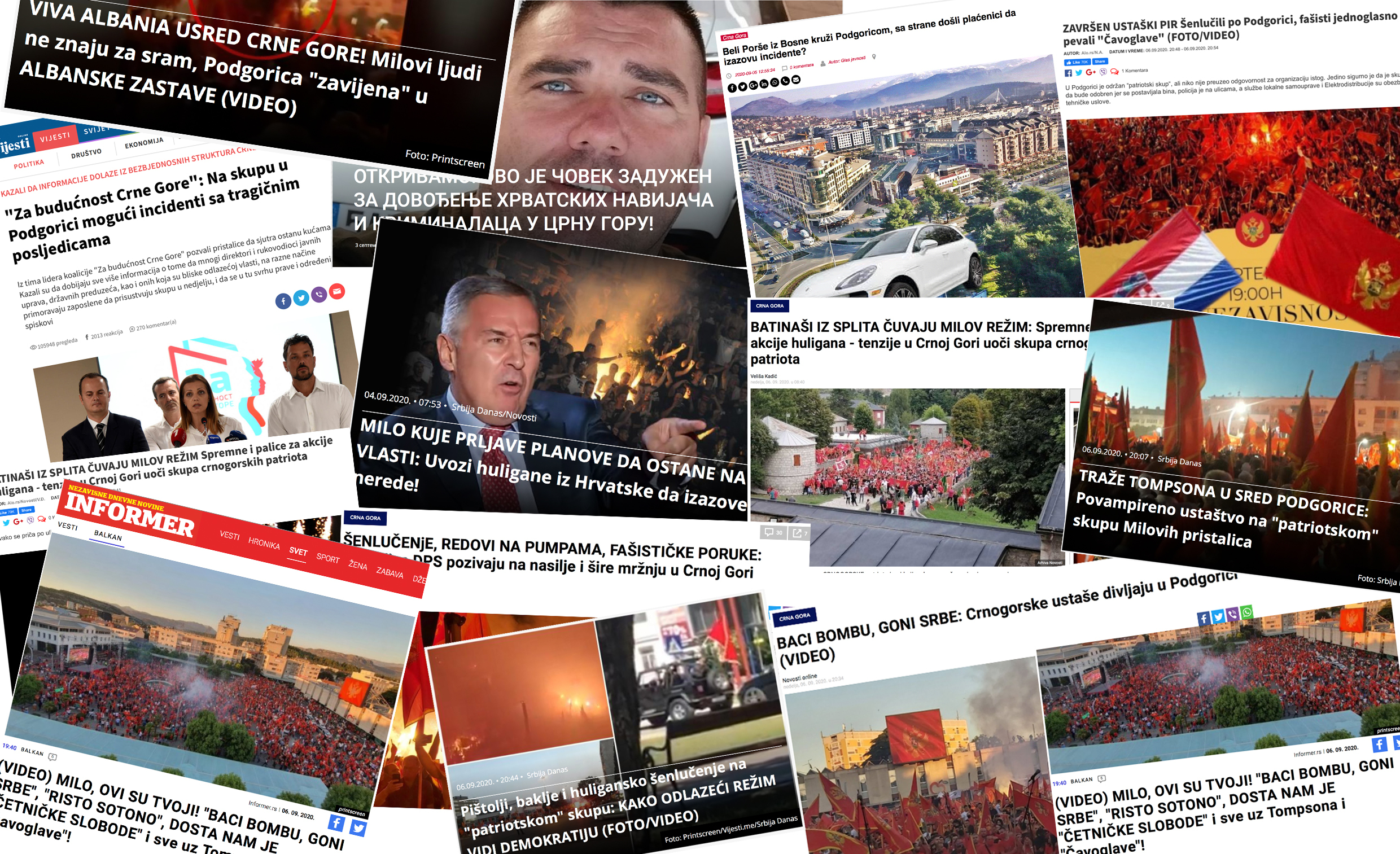 Patriotic gathering: chaos was announced, but there were no incidents

The patriotic gathering which took place in Podgorica on September 6 (seven days after the parliamentary elections) attracted the attention of the local and regional media, almost to the same extent as the Parliamentary elections on August 30. On the eve of the gathering, many fake news pieces were published, predicting the unrest which would allegedly be caused by the hooligans from Croatia and the region.

Many Belgrade tabloids published the fake news that the unrest will occur in Podgorica during the gathering. Allegedly, the authorities would engage the hooligans from Croatia to create chaos. Novosti, Informer, Srbija Danas stated that the hooligans were supposed to receive the Serbian and the flags of Old Montenegro and other equipment and cause the incidents in the coastal towns of Montenegro, on the basis of ethnic and religious background. Supposedly, the supporters of the pro-Serbian parties would be accused of these incidents. All the media which published this fake news referred to Nacionalist, the non-existing Zagreb-based media outlet.

Glas javnosti, the recorder in the publishing of the fake news, wrote on the white Porsche with Bosnian license plates which was circulating through Podgorica on the eve of the gathering. Allegedly, the persons who were planning to cause the incidents were in this car.

Alerting the public with the announcements of the unrest

Novosti added that the people would receive €100 to create chaos and unrest during the gathering in Podgorica. Referring to the anonymous sources and operational findings, they stated that 300 wooden bats were made in Niksic only and that the hooligans are imported from Bosnia and Herzegovina and Croatia to cause unrest. The news portal Alo followed up on this, stating that the three-color flags are being printed as well as the t-shirts of the coalition For the Future of Montenegro (Za budućnost Crne Gore), which would allegedly be used by the hooligans, referring to the press release of the True Montenegro (Prava Crna Gora). The same piece of news was republished by the IN4S news portal.

The similar narratives came from the team of Zdravko Krivokapic, the leader of the coalition For the Future of Montenegro. On September 5, they stated that they had the information from the security structures on the possible incidents with tragic consequences during the Patriotic gathering on the Independence Square (Trg Nezavisnosti).

During the very event, which was characterized as the Ustasha celebration, the media stated that the people sang Bojna Cavoglave, the song of a Croatian singer Marko Perkovic Thompson. Similar articles were published by Informer and Srbija danas, that reported about public calling for violence and hate speech used by the gathered, stating that besides Thompson and his song, the participants were shouting throw a bomb, persecute the Serbs while waving with Montenegrin flags. That kind of chanting did not occur during the gathering and the Thompson’s songs were not played either.

Controversy over the number of participants

The number of participants was also discussed. The Serbian tabloids characterized the gathering as a miserably small group with only a couple of thousands of people. Glas javnosti writes that the authorities barely gathered 7,000 people while the news portal IN4S claims that there were around 8,000 them. They illustrated the claims with the photos from different corners or those made before the gathering when the people just started to arrive, even though the estimations should not be made in that phase. On the other hand, according to the official data from the Police Administration, there were 50,000 people. According to the DFC analysis, made on the basis of the videos and photos from the ground and drone, there were around 35,000 people on the Square last night.