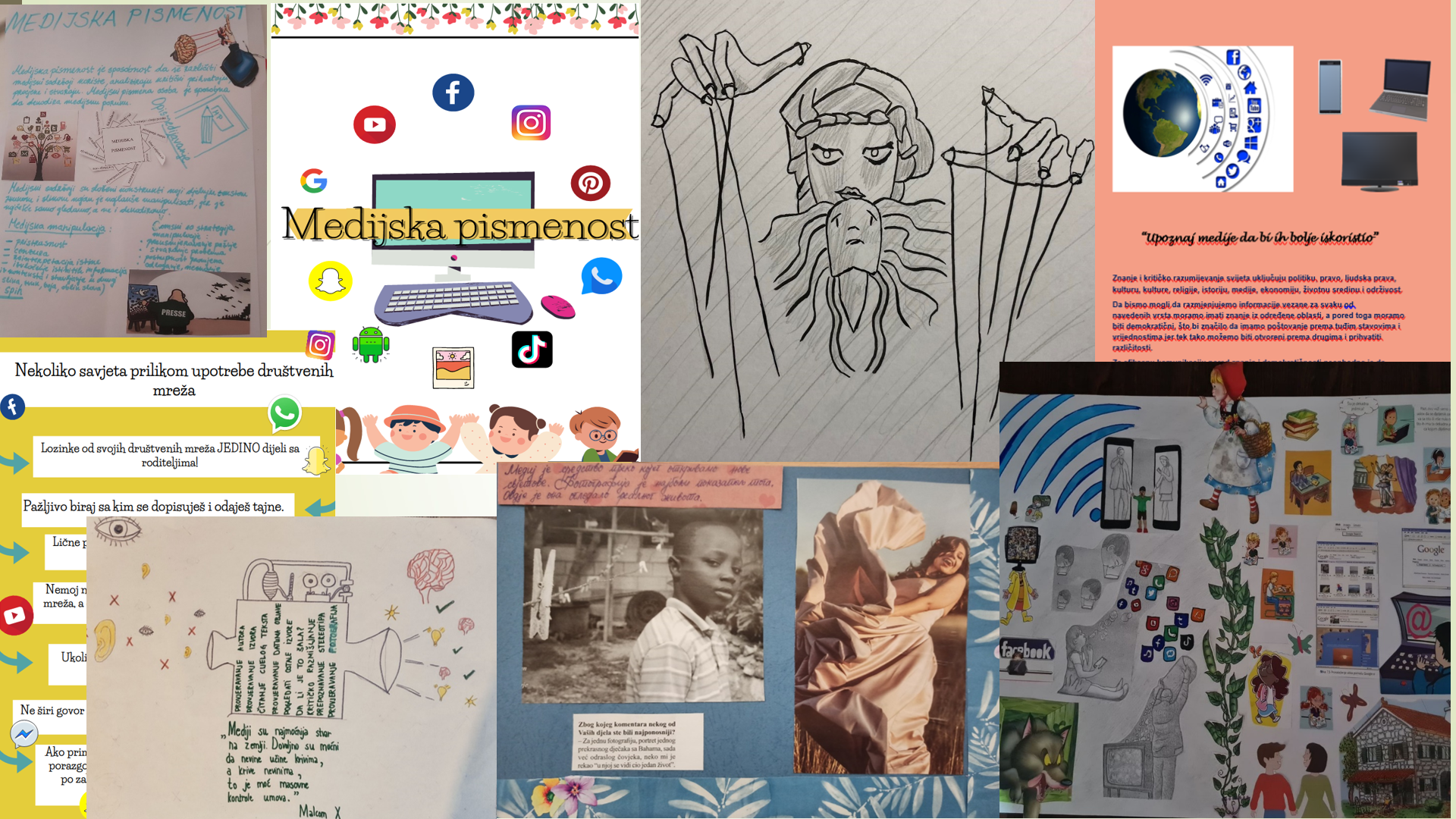 During the summer semester, the Faculty of Philology introduced the module Media literacy within the project Preparing future teachers: Education for Democracy and Human Rights. For this occasion, in this month’s DFC Magazine issue, we are talking with the module authors Ph.D. Dusanka Popovic, Assistant Professor at the study programs Montenegrin Language and South Slavic Literature, Serbian Language and South Slavic Literature, and Pre-school Education, and Ph.D. Marijana Cerovic, Assistant Professor at the study program English Language and Literature.

Considering that the main activity of the project is selecting one of nine key concepts of democratic culture promoted by the Council of Europe, as well as the module creation, Ph.D. Assistant Professor Marija Cerovic says that they chose the topic of media literacy precisely because of their awareness of its significance in today’s society and familiarity with the state in Montenegrin education institutions.

DFC: Since its founding, the Digital forensic center has been highlighting the significance of media literacy in the fight against disinformation and fake news in its statements and texts. This is why we believe that the creation of the module Media literacy for students of the Faculty of Philology is quite a step forward for Montenegrin society. What motivated you to start this project?

Dusanka POPOVIC: It seems that, so far, the influence of media literacy on each individual to take their active role within both smaller social community they belong to and the society as a whole, through understanding, selecting, and receiving information of different content, form, and purpose spread by the media, has not been sufficiently recognized. Digitalization and new media forms, the increasingly rapid flow of information and their quantity require a media literate teacher, who would be able to understand their students, monitor and prepare them for constant and intensive contact with different kinds of media and their polysemic messages.

DFC: We understood that the module would be realized within the project Preparing future teachers: Education for Democracy and Human Rights. Could you tell us your primary goal and what guided you in drafting this module?

Marijana CEROVIC: The main activity of the said project, organized by the European Wergeland Centre, in partnership with the Faculty of Philology, among others, is the selection of one of nine key concepts of democratic culture (promoted by the Council of Europe) and the creation of module covering selected topic. Being aware of the importance of media literacy and familiar with the state in our education institutions concerning this issue, we saw this activity as the opportunity to promote media literacy and offer it to our students as a free-choice elective. The students from three study programs are participating in this project, but this module could be offered at all faculties educating future teachers.

To encourage students to consider their responsibilities

DFC: What are you expecting from this project, how was it designed and how do you assess the so-far interest of students to take the module?

Dusanka POPOVIC: Human rights to express freely, select, and receive information spread by media bound the education system to prepare young people, who are particularly exposed and susceptible to the influence of media, to develop critical thinking and safely consume information. Drawing from the Council of Europe Reference Framework of Competences for Democratic Culture, we have opted to remind students of the key concepts of media literacy, and the particularity of media text as a construct, of ways in which media messages are constructed and deconstructed, and of the notion of censorship from the perspectives of both editor and reader. And also to teach them how to identify stereotypes and prejudices following the media messages shaped to serve their goal, and to encourage them to consider their responsibilities they assume as either users or authors. An important part of this module is the methodological approach to media content in primary and secondary schools, i.e. how to prepare for teaching on media literacy and how to implement that in a classroom setting. How to implement the practice in schools, i.e. organize classes on media literacy, is also covered in this part.

Since the module is in a pilot phase and is a free-choice elective, at the very beginning, when they were offered the module, and later during the activities, students have shown a high interest, actively participating in discussions, thinking critically, and sharing their opinions on key points of media literacy. They have shown a special interest in research of the issue we are dealing with, creativity in preparing presentations, posters, and other works produced at classes. One of the important guidelines for the module implementation is that the active and interactive teaching methods should be applied in the realization, reproducing a democratic learning environment. One of the goals of the project as a whole is to help future teachers to create a democratic environment in small school communities, whose integral part is media literacy. What we expect is that the importance of this module for the competency of future teachers gets recognized and becomes available to all students.

Teachers should have a high level of media competency

DFC: Do you believe that media literacy should become a mandatory subject in schools? How much significant role does it play for the development of critical thinking among youth?

Dusanka POPOVIC: Despite some elements of media literacy being covered by certain subject programs (for example, Subject Program for Montenegrin-Serbian, Bosnian, and Croatian language and literature, and as a special elective subject in general high schools), this is not sufficient to fully develop this literacy. This is why we believe that introducing media literacy as a separate and mandatory subject would significantly help to understand media, the ways in which they function and the ways in which we receive their messages, and develop critical thinking concerning social events in students’ environments. Besides, high school students, once at faculty, would be better prepared to further study, broaden, and develop this field. We also believe that all teachers should have a high level of media competency that must be continually advanced, meaning that they can recognize the cultural and ethical aspect of media, are familiar with rights, media policy, and its social influence, and have cognitive media skills including knowledge, understanding, and the analysis of media content. The subject could become then a cross-cutting theme covered in all subjects’ programs taught in schools and to get the status that has been nicely put as in one of the guides on this topic for our region: Rather than a new subject, media literacy represents a new learning approach for all other courses.

DFC: To what extent acquiring media literacy skills can help to develop society as a whole and what would be the first lesson of media literacy you would give to both experts and the general public?

Marijana CEROVIC: Media literacy is one of the ways to build and preserve a more human and fairer society, which is, undoubtedly, the basis for its further development. necessary if it wants to further develop. Should we base the youth education on the idea that education for democracy must be received early on at schools, where everyone knows not only their rights but responsibilities as well, we will help them to become active and proactive members of their social communities. It is a serious and demanding task to do, and the choice is upon us – the society and the state. The first lesson of media literacy should be to all ask ourselves: Are we controlling media or are they controlling us? And also what else do we need to know to answer this question…