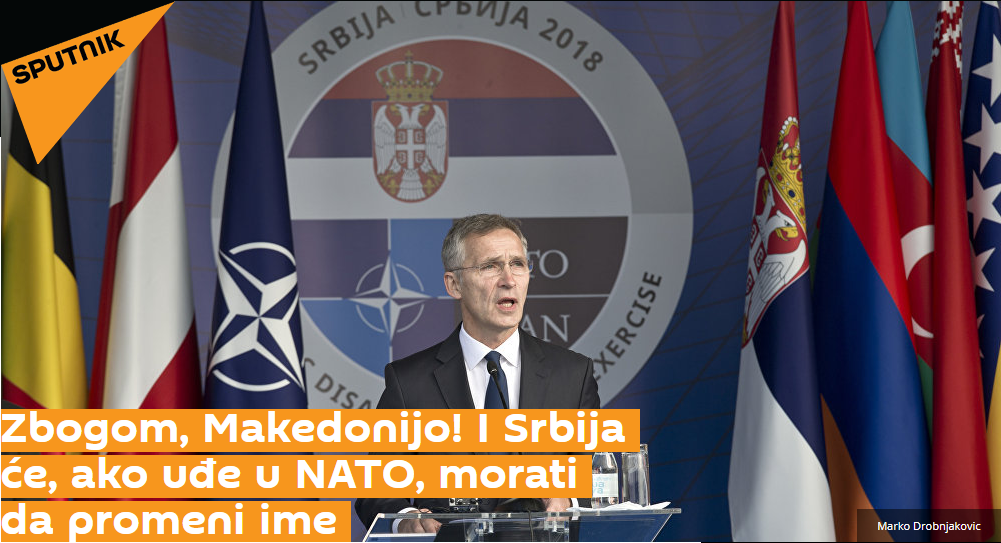 Changing a state’s name a condition to join NATO?

On February 6, 2019, a day after Macedonia signed the Accession Protocol to NATO, Sputnik Serbia published on its website an article on similar content, trying to attract readers with the catchy title: „Goodbye Macedonia! If joins NATO, Serbia will have to change its name as well“.

The text states that the citizens of Macedonia refused the new name in a democratic manner at the referendum, or that North Macedonia did not get the legitimacy of its people, which is presented otherwise by the State Election Commission of Macedonia. It is important to add that the author of the text “forgot” to refer to the non-binding and consultative caretaker of the referendum. A to the data of the State Election Commission, available on its official website, there were 36.89% of voters at the referendum. To the question: „Are you for the EU and NATO membership, along with the acceptance of the agreement between FYR Macedonia and Republic of Greece?“, 91.41% of the citizens gave affirmative answer while 5.66% of the citizens were against.

The text does not mention recent relations between Greece and Macedonia, which was the obstacle for the Macedonia’s integration process, thus making a reader deprived from complete and accurate information.

Even though the General Secretary of the Alliance, Mr. Jens Stoltenberg, highlighted that the signing of the Prespa Agreement was a first crucial step forward for the beginning of the accession process to NATO, the author’s focus was on the fact that Macedonia approved the recognition of Juan Guido as the President of Venezuela and on the sarcastic comments, such as the one stating that joining NATO and becoming its member required not only to respect the will of your citizens but to have „the luxury“ to revoke the will of any nation on Earth.

The author also makes mocking comments that Montenegro, after joining NATO, has become unofficially – Montenegro, and that Macedonia should have changed its name to North Macedonia in order to „march“ into the Alliance, even though it is known that neither our country nor Macedonia were conditioned by NATO to change their names. In this way, the reader is even more deceived and drifted further away from the truth.