You are here: Home / Disinfo Slučajevi / AUTHORS IN THE MONTENEGRIN TEXTBOOKS 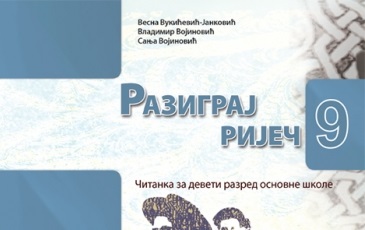 The informative portal borba.me published on February 9, 2019 an article entitled “Montenegro goes deeper and deeper: Learning Albanian songs and cutting out Serbian writers” on its site. This is the heading that can easily catch the readers’ attention and make them continue reading the text and find out what the kids in schools learn and which texts they do read.

As stated in the text, there is an Albanian song Mora Mandolinen in the textbook for the musical culture subject for the third grade of elementary school. The portal points out this information as something unacceptable, stating that the children’s learning the Albanian song results in Montenegro getting deeper and deeper. However, we must point out the fact that the text does not state that this is a folk song, but rather an Albanian song, while under the photos from the textbooks it is written that it is an Albanian folk song, and it is published on the portal. Accordingly, it is important to emphasize that in the musical culture curriculum for the third grade of the elementary school, one of the learning outcomes is singing, individually and in a group, folk and artistic songs, which is a sufficient reason for this song to be found on the list.

Moreover, the text states that there are some new names in Montenegrin textbooks, while some other names have disappeared from it. The author gives mocking comments that everything is different in Montenegro today, and instead of the Serbian renowned writers, the opportunity has been given to some new, literary “giants”. The author characterizes Serbian writers as renowned, while new authors, who are predominantly Montenegrin and Bosnian authors, are mockingly called “giants”.

Having an insight into the curriculum of the Montenegrin – Serbian, Bosnian, Croatian language and Literature subject, which is available on the official website of the Bureau for Educational Services of Montenegro, we have come to the list of the authors in the Montenegrin textbooks. All names listed on the portal borba.me are found in the textbooks, apart from Nazmi Rahmani. In the textbooks from the first to the ninth grade of the elementary school, Montenegrin, Serbian, Bosnian and Croatian writers, as well as some foreign writers, are enlisted. Only one Albanian writer and his piece is found as a text proposal for the ninth grade.

The author pointed out that, back then, the curriculum could not be imagined without St. Sava, Desanka Maksimovic, Jovan Jovanovic Zmaj, Aleksa Santic, implying that these authors are no longer present in the textbooks. Nevertheless, the name Desanka Maksimovic or Aleksa Santic can still be found in the elementary school textbooks, which can be confirmed by reviewing the curriculum.

Also, a detailed analysis of the Montenegrin-Serbian, Bosnian, Croatian language and literature curriculum, led us to the conclusion that the number of Serbian writers presented in Montenegrin textbooks is almost equal to Montenegrin, which may confute the author’s information that Serbian writers were cut out.